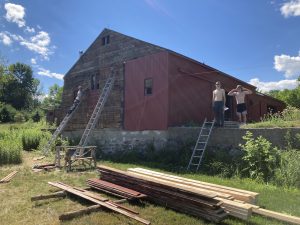 I love it actually. Carpentry is such a nice change of pace for me. A different kind of thinking.

In the first photo is the week-one-crew: Ezra and Porter just starting their summer tans. High school kids from the neighborhood. And Jack is on the ladder.

For me, there is something very grounding about gettin stuff done. Stuff you can see. In my work I help groups build agreements but rarely get to see the stuff that happens after. The results.

And fractions. Gotta love working with a tape measure and fractions for a change. And doing math with a pencil on a board. It is SO not digital. 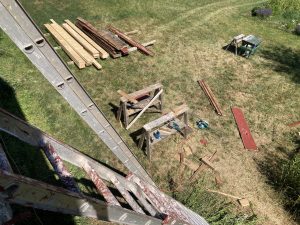 My mom taught me that the magic of vacation is that it’s different. A dramatic switch from the normal. For me vacation doesn’t have to be sitting in a chair to be relaxing. Doing a project with the neighborhood kids works great for me.

I hope that you are finding and doing what you love this summer. Whatever it is.

Talks and Training are the Fall Focus

I am blessed with more work coming in than I can handle. I turn away a lot. Demand is running high right now.

I’m currently designing a multi-day facilitation course to be offered in the Fall, I’m also working on some other new training sessions. If you were hoping for me to facilitate your Fall board retreat, you might be out of luck. But if you want to book some Fall training, let’s talk.

My new book Together We Decide comes out in September, so this is another natural reason to pivot to Talks and Training for the Fall. There’s a lot in the book that I want to talk about! And train you on.

Thank you for understanding and supporting my choice to ramp down facilitation and ramp up training. To help make more facilitators. At least that’s the plan.