To many people, new pronouns and newly-visible gender identities can be confusing, intimidating, or even alarming. I’m talking about when a person asks be referred to as they. Or someone who looks like a man asks to be referred to as she. Or a feminine-looking person wants to be called a he.

There are lots of terms and definitions out there and for me it was too much to learn it all at once. Here are some basics.

Assigned Sex – An anatomical thing, the description that a doctor assigns to a baby based on their body. Typically referred to as male, female, or intersex.

Gender – What your core spirit feels like. Whether you feel like a man or a woman or something else deep inside. Some people have two spirits, or more, and those deep inside feelings can change from day to day. Typically referred to as man/boy, woman/girl, nonbinary, or queer.

Sexual Orientation – The sex or gender you want to get cuddly with. Typically referred to as straight, gay, lesbian, bisexual.

I’ve found that it works well if I easily allow for anyone I meet, however they look, to align their stuff however they want. It’s a Quaker ideal: listen and act on the light of god within you. And it’s an American ideal: we love our rights to individual freedom and self determination. We pride ourselves as a nation of self-made people!

And did you know that using the pronoun “they” to refer to an individual is not new in the English language? Shakespeare used it that way, for instance.

This is not a whole big explanation of pronouns. There’s a lot to it. I’m simply trying to pass along some basics that I’ve learned only in the last few years. And I’m open to corrections, clarifications, and other views. We’re all just trying to figure this out.

It’s hard when someone asks you to change how you think of them. For example, “I know I’ve been your female-looking co-worker for years, but I actually identify as non-binary and prefer using they/them when referring to me.” It’s also hard when someone looks feminine but asks to be thought of and referred to as masculine, or visa versa.

These things can be really hard, actually. Gender-based cues and instincts have been hard-wired into us. Having to change this “hard wiring” can feel like an imposition. Yet “because it’s hard” is not an excuse. I have to make an effort. And you know what? It’s not actually hard-wired with actual wire. Old instincts exist in your brain cells and brain cells can change.

The effort I have to make is mostly a spiritual one; to actually really see every person as a unique individual who gets to define themselves. If that’s what I’m walking around with – that spiritual attitude — I’m not likely to accidentally show disrespect.

Yet I also have to make an effort with specific people who have asked for they/them pronouns or pronouns that don’t immediately “register with me.” Most people who want specific pronouns tell us what they want. It’s my job to keep track of that and when I am about to write to or talk to such a person, or about such a person, I am actively trying to keep in mind that when a sentence calls for a pronoun, I will say the right thing. I practice in my head.

When I realize I have made a mistake, I look for an immediate opportunity to fix it. I don’t pretend it didn’t happen or that no one noticed, even though there may be no reaction whatsoever. At the next break in the conversation, for instance, I might say, “I realize I called you a she just now and that’s not right. Sorry about that.”

Then move on. No need to make a thing of it. Demonstrate respect by actually NOT making a thing of it. A quick look-in-the-eye genuine apology can go a long way. And look for a chance to use the correct pronoun in the future so we can all see that you are serious about wanting to get it right.

3. Learn stuff on your own

When I first started encountering people who wanted me to call them they instead of he or she, my instinct was to ask them to explain themselves. Really, I wanted to learn from them what this was all about and why they were asking me to make such an accommodation.

Blaaak. That notion – that I wanted people to explain themselves – sends shivers now that I write it. It reminds me of “Explain yourself young lady,” or other phrases I heard as a child.

And that’s exactly what it might feel like to a person being asked to explain: demeaning. Perhaps “justify yourself,” is a good translation of how it might feel.

Curiosity is good and if you feel close enough with a they/them type person to talk about stuff like gender then ease into a conversation and be ready stop at any moment. But don’t expect someone to teach you from scratch. Learn some stuff on your own first. Use the right words. Have good questions. Show some respect. Be the ambassador who arrives in a foreign country and even though clumsy, tries to greet people in their native language.

Rather than look at someone with they/them pronouns as a burden, I can make a choice to see it as an opportunity. What an easy way to show someone instant respect! All I have to do is pay attention to what someone wants to be called and do what they ask. They will notice. Using the right pronoun is an easy way to build instant mutual rapport.

As in may of these articles, I need to check my privilege. My sex, gender, and sexual orientation are all aligned in very traditional ways. I don’t get questioned. I don’t get asked about my pronouns very often. But I broadcast them anyway as a show of support for others, and to show you that I COULD be a they/them but happen to be a he/him; no better or worse than a they/them or a her/she, just all of us sharing our pronouns.

As a practical matter, I have a lot to gain by making an effort on pronouns and little to lose. 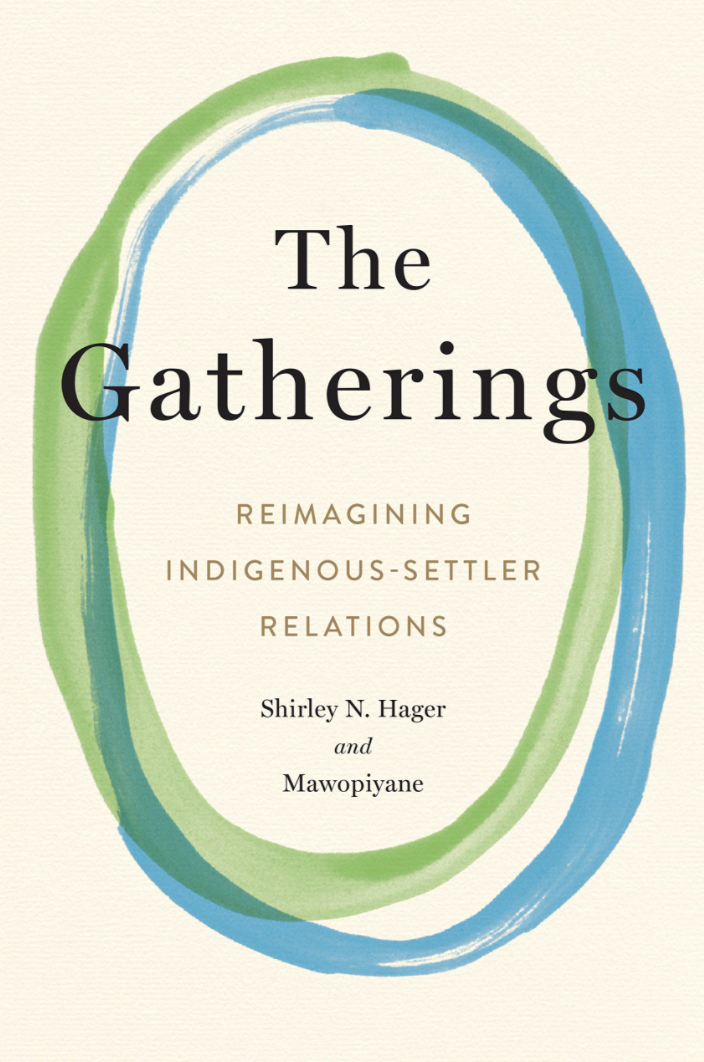 I haven’t even read this book yet and I love it.

I think this book is about bridging divides; about understanding each other. “The Gatherings provided an opportunity to learn “from” rather than learn “about” Indigenous experiences and perspectives, a subtle but powerful distinction that disrupts the colonial legacy of objectifying Indigenous peoples.” That’s from the Afterward by Frances Hancock.

This is what we tried to do at Make Shift Coffee Houses; places where liberals and conservatives came together to learn “from” each other rather than “about” each other. And it disrupted the labels they otherwise put on each other.

Here’s from the jacket flap: In a world that requires knowledge and wisdom to address developing crises around us, The Gatherings shows how Indigenous and non-Indigenous peoples can come together to create meaningful and lasting relationships.

Thirty years ago, in Wabanaki territory – a region encompassing the state of Maine and the Canadian Maritimes – a group of Indigenous and non-Indigenous individuals came together to explore some of the most pressing questions at the heart of Truth and Healing efforts in the United States and Canada. Meeting over several years in long-weekend gatherings, in a Wabanaki-led traditional Council format, assumptions were challenged, perspectives upended, and stereotypes shattered. Alliances and friendships were formed that endure to this day.

The Gatherings tells the moving story of these meetings in the words of both Indigenous and non-Indigenous participants. Reuniting to reflect on how their lives were changed by their experiences and how they continue to be impacted by them, the participants share the valuable lessons they learned.

The many voices represented in The Gatherings offer insights and strategies that can inform change at the individual, group, and systems levels. These voices affirm that authentic relationships between Indigenous and non-Indigenous peoples – with their attendant anxieties, guilt, anger, embarrassments, and, with time, even laughter and mutual affection – are key to our shared futures here in North America. Now, more than ever, it is critical that we come together to reimagine.

The book is authored by Shirley N. Hager and Mawopiyane. Shirley Hager is a retired from University of Maine Cooperative Extension and is a Maine Quaker active in Tribal-State relations. Mawopiyane, in Passamaquoddy, literally means “let us sit together,” but the deeper meaning is a group of people coming together, as in a longhouse, to struggle with a sensitive or divisive issue…..  Mawopiyane is a word that is recognizable in all Wabanaki languages, and it reflects the collaborative nature of our efforts [from the book].

You can get the book through your local book store. They are in stock at Gulf of Maine Books in Brunswick. Or you can order online direct from the publisher.

Thank you Shirley and Mawopiyane for writing such an inspiring book.