How to Change the Culture of Congress

A couple weeks ago there was a hearing on Capitol Hill on How to Build a Move Civil and Collaborative Culture in Congress. I listened to it live and wrote to the staff afterwards, hoping to get involved. It was pretty inspiring.

Chaired by Representative Derek Kilmer (D-WA) and Vice Chair Representative William Timmons (R-SC), the Select Committee on the Modernization of Congress has been working since 2019; six Democrats and six Republicans appointed by party leaders.

Sometimes when people read my stuff or are in a meeting that I run, I hear “They really need you down in Washington!” Indeed, many Americans have come to believe that our national Congress is incapable of solving problems on behalf of the nation. This Committee is working on that.

They are currently focusing on three fronts: time, incentives, and relationships.

Time. Members of Congress are way over-scheduled. Simply finding time to talk through issues and really understand each other’s perspectives seems impossible. The sessions in Washington often start on Tuesday morning and adjourn Thursday afternoon and they all go to their home districts each week from Friday through Monday. To be more civil and collaborative, like all things worth investing in, requires quality time.

Incentives. There are currently strong incentives in Congress for gaining wins for your party or your district at any expense, but few incentives for being civil or collaborative. Some interesting ideas were provided at the hearing about a group or respected congressional leaders, from both parties, actually scoring all Members of Congress on civility and collaboration. At least make it a thing to look at and report on.

Relationships. Related to time and incentives – both stacked in the wrong direction – members of Congress don’t have the types of close relationships with each other that are conducive to civility and collaboration. “This place is messed up,” one of the Committee members explained. “We don’t have lunch here.” Lunch Is not built into the schedule and there’s no common place (think school or company cafeteria) where everyone gets together to simply talk, hang out, and get to know each other. Someone suggested that there need to be more informal and confidential meetings (like across a lunch table). “There have to be places where no one is performing,” they explained.

Other ideas at the hearing included better onboarding and orientation for new members of Congress, and professional development training among Congressional staff on topics such as conflict resolution, communications, and collaborative techniques. Congress is an  organization with 10,000 employees, one of the Committee Members pointed out, and apparently NO institutionalized professional development training for its staff.

I have this old school belief that Congress works for us, the people. If we want members of Congress to be more civil and collaborative WE have to demand that of them. This means not electing members who put party over country or who put meanness over respect. It means praising our members of Congress for actually talking with their adversaries and making compromises.

One of the Committee Members explained how he is from Minnesota where ice hockey sets the culture. Hockey teams compete hard against each other and at the end of each game they line up and every player shakes hands with every player. Their respect for the game and for each other is more important than winning or losing. “Congress should do that,” the Representative from Minnesota explained. “We should line up and shake hands with each other every session.”

The Committee releases recommendations on a rolling basis throughout the year. Click here to see what they’ve come up with so far.

These are all just ideas of course. What do YOU think?

It’s no coincidence that I’m writing about the need for men to share leadership on the eve of Earth Day (April 22), in the midst of Spring’s unfolding, and at time when our Earth ecosystem is struggling. I don’t believe that patriarchal leadership marked by empire building has served humanity well and it’s time for a change. To me it’s very simple and very clear; if women were in charge, our environment would be healthier. 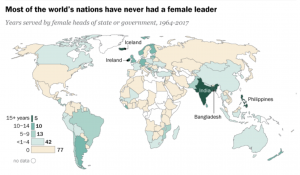 The data in the map is 4 years old but relevant I think. In Tan are the countries that have never had a female head of state. The Dark Green countries have had women at the helm for 15 years or more. Read the report here.

And just a note that I struggle to get the terminology right. Many reports on this topic use the term women and many use female. Yet many people don’t identify as men or women. I considered the term non-male so as to include non-binary people, yet I have read cautions about labeling and lumping non-binary people with women. I’m not sure what’s the best terminology, just that it’s time for a change.

What makes for a good democracy?

The League of Women Voters of Maine and Maine Citizens for Clean Elections teamed up to prepare a recent report – The State of Maine Democracy – that looks at the following:

A good democracy requires attention to all this stuff. I know people say that the United States is a Republic, or a Federal Republic, or a Constitutional Democracy, and other things, yet fundamentally don’t we want government by the people and for the people? To most of us, we think that basic democracy is when the leaders represent the people. That’s what most Americans expect of their government.

This report looks at factors impacting how well leaders represent their people; the list above.

As you might imagine, my home State of Maine gets good marks. We are proud of our consistently high voter turnout (3rd in the country at last look) and of our high integrity elections. We get high marks for freedom of information and for inclusive and protective voting laws.

Yet all is not well with democracy in Maine. “To put it bluntly,” the report says, “the Legislature is and has been dominated by older white men.” The report also cites gender disparity in the Judiciary. If we expect the leaders to represent the people, it works really well when the leaders look like the people.

Where voter turnout is lowest in Maine, there are correlations with race and poverty. These things (race and poverty) are barriers to voting and thus affect how well “leaders represent the people.”

The report does a great job of providing take-aways and conclusions from a variety of complex data. Thank you League of Women Voters of Maine and Maine Citizens for Clean Elections for helping us monitor the health of our democracy.